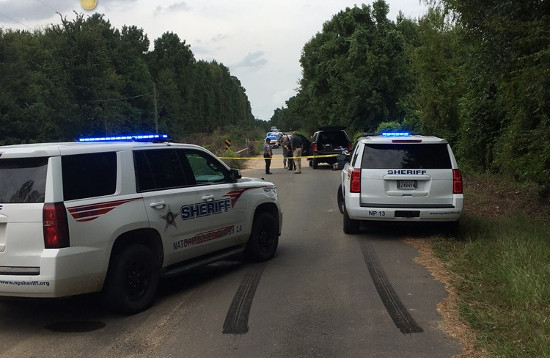 The NPSO 911 Center received a 911 call Aug. 6 at 1:12 pm from a couple traveling through the area reporting a body underneath a bridge on Grappes Bluff Road approximately ¼ quarter off of Hwy. 480.

Deputies assigned to the NPSO Patrol Division responded to the scene discovering a body beneath the bridge.

Crime Scene Technicians from the Rapides Parish Sheriff’s Office who specialize in collecting crime scene evidence is responding to process the crime scene.

According to Natchitoches Parish Asst. Coroner Steven Clanton, the body will be sent for an autopsy to determine the cause of death.

It appears the body has been underneath the bridge for possibly a week.
The scene remains active. No identification has been made on the body.

Natchitoches District Attorney’s Office and Natchitoches Parish Coroner’s Office therefore information at this point is limited as we continue to investigate and process the crime scene.

We ask that the public stay away from the crime scene while detectives work the scene and collect evidence.

If you have any information regarding this investigation please contact the NPSO
Criminal Investigations Division at 318-357-7830 or the Red River Parish Sheriff’s Office at 318-932-4221.